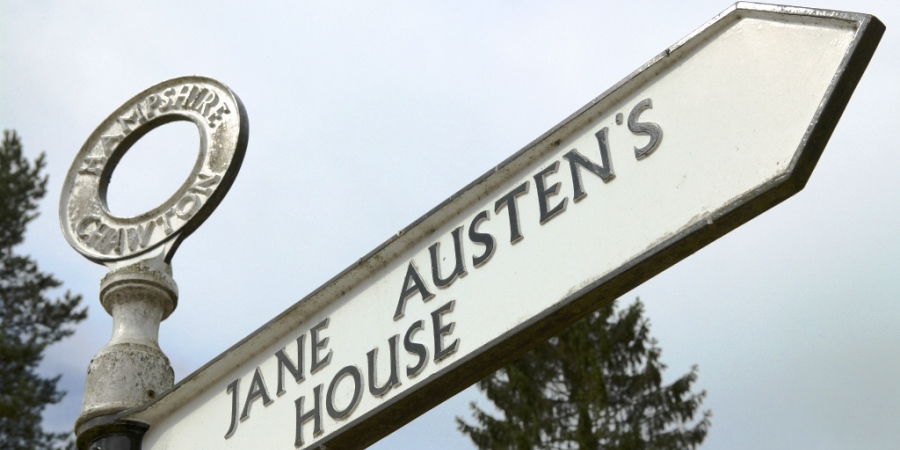 2017 marks the 200th anniversary of author Jane Austen’s death, and with so many links across the country to the author, it would be a shame not to seize the moment and celebrate Jane’s life and work.

Jane Austen is celebrated as one of England’s greatest novelists and has been a household name for more than two centuries. Interest in her, and her books – from Sense and Sensibility and Mansfield Park to Emma and Northanger Abbey – is only likely to increase during the next few months as the country marks the 200th anniversary of her death.

From Hampshire and Bath to Berkshire and Derbyshire, a variety of UK destinations appear in Austen’s writing. These locations featured in the life of Jane Austen as well as her characters, so why not get inspired and organise a group trip? Discover her upbringing, her social life, her family, and of course, the places that inspired her famous writings.

As Jane’s birthplace, final resting place and where she spent her most prolific writing years (including the penning of her first novel, Sense and Sensibility), Hampshire is a major focal point for the Jane Austen 200 commemorations and events.

Start your trip at Jane Austen’s House Museum (her former home) and Chawton House Library in the village of Chawton, which is hosting changing exhibitions, talks, activities and other special celebrations between now and December. 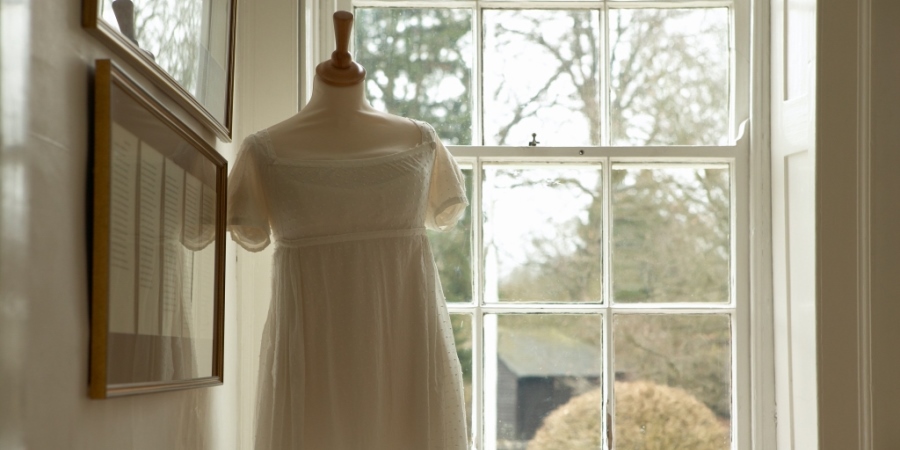 In Basingstoke, visitors will also be able to follow a downloadable sculpture trail made up of 25 ‘book benches ‘ between 17th June and 31st August; each designed and painted by a professional artist with their personal interpretation of a Jane Austen theme.

Visitors to the area can even sleep at a location visited by the author with a stay at Oakley Hall Hotel, Steventon; a luxury 50 bedroom hotel, which Jane visited frequently in its guise as Oakley Hall.

The south west spa city of Bath is a great place to get to know Jane Austen, where she lived between 1801 and 1806. The city’s preserved Georgian architecture remains unchanged from the streets depicted in Northanger Abbey and Persuasion.

Visitors can step back in time with a free downloadable audio walking tour of the city called ‘In the Footsteps of Jane Austen’, that includes extracts from her novels and letters, which describe Bath as it would have been in its Georgian heyday.

Be sure to stop off at the Jane Austen Centre, located in a Georgian town house just a few doors down from where she once lived, and now home to an exhibition of costumes, manuscripts, and film clips that bring the author’s world to life. 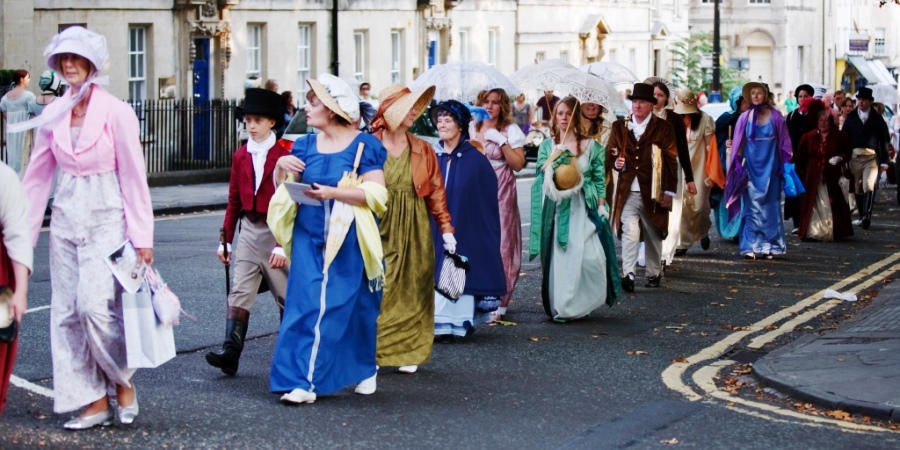 Jane is known to have visited and loved Lyme Regis, Dorset, from letters to her sister Cassandra where she described walking on the Cobb. Her last novel Persuasion was set in the Dorset seaside town, too.

Sightseeing agency Literary Lyme offers a wealth of guided walking tours of Lyme Regis and the Jurassic Coast. They allow groups to follow in the footsteps of authors who chose to visit and live there and find out more about its use as a setting in novels and films.

A variety of tours are available – from short 90 minute walking tours around Lyme Regis to longer trips around the coastline, including Golden Cap, the highest point in southern England, which features in a film adaptations of Persuasion.

Jane Austen went to school at Abbey Gateway, Reading between 1785 and 1786. It was reportedly the only time in her life she lived away from home. Groups can explore the area on a Readipop Reading Literary Trail, a free walking tour developed as part of a heritage project called Reading on Tour to uncover Reading’s hidden history.

Film buffs can also visit the 18th-century Palladian mansion of Basildon Park. This doubled as Mr Bingley’s house, Netherfield, and the location for Darcy and Elizabeth’s first meeting in the 2005 production of Pride and Prejudice that starred Keira Knightley as Elizabeth Bennett and Matthew MacFadyen as Mr Darcy. Basildon is a National Trust property and offers groups of 15 or more discounted entry rates.

Derbyshire and the Peak District

Austen herself quoted there being ‘no finer county in England than Derbyshire’, so it is fitting that the region has featured widely in Jane Austen adaptations. Perhaps one of the most famous is Lyme Park, which included Colin Firth’s famous ’Mr Darcy lake scene’ in the BBC’s adaptation of Pride and Prejudice.

Additionally, on the big screen, Chatsworth House was used as the location for Pemberley, the residence of Mr Darcy in the filming of Pride and Prejudice (2005). It is believed that Jane Austen based her idea of Pemberley on Chatsworth, as she wrote her novel while in nearby Bakewell, which incidentally is considered to be the inspiration behind Lambton. 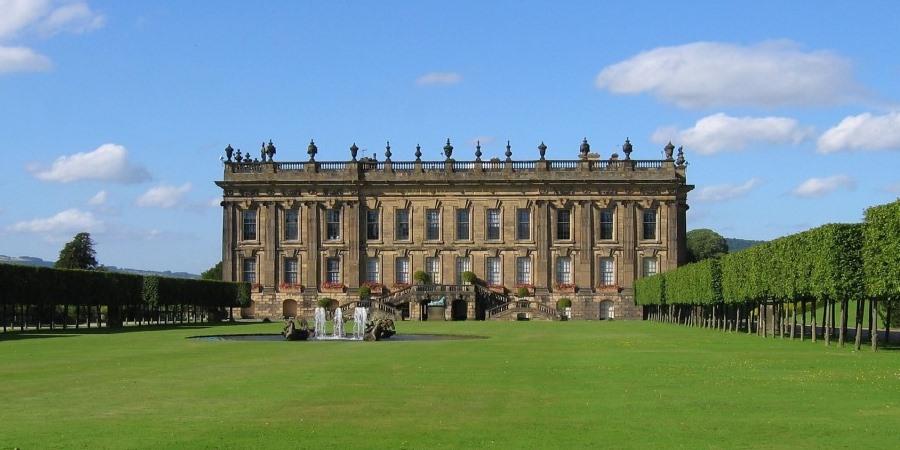 Head to the Group Leisure & Travel Show this October to meet our exhibitors, many of whom have their own literary links or have been seen on the big screen.

The show is the leading exhibition of its kind, when group organisers and coach operators spend one brilliant day meeting a vast range of exhibitors, including top attractions, tourist boards, accommodation providers, ticketing agencies, coach companies and tour operators – all ready to look after groups.

The GLTS 2017 will take place in Hall 18 at the NEC, Birmingham on Thursday 12th October, and if you register for free entry now you can take advantage of our free parking offer.

Companies interested in exhibiting can telephone Sharon Yandell on 01908-613323 for more information or e-mail sharon.y@yandellmedia.com.