20 highlights from 20 years of the Group Leisure & Travel Show 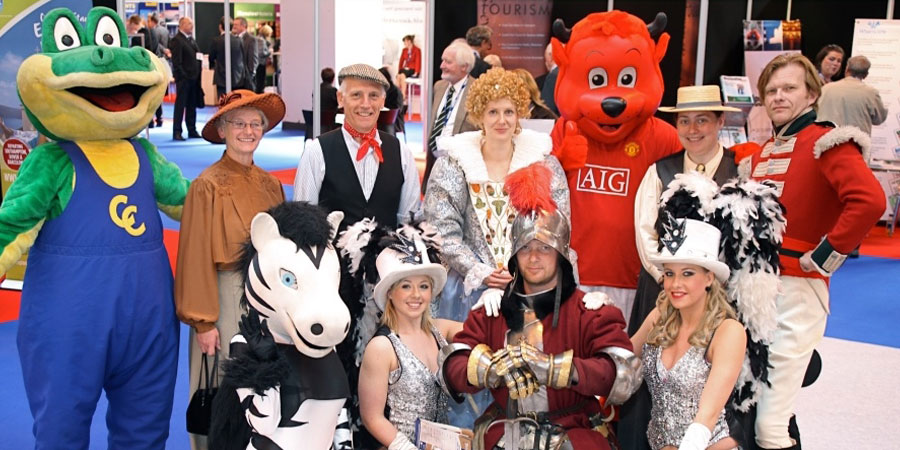 If you didn’t already know, it’s the 20th annual Group Leisure & Travel Show on 20th October. To celebrate – in addition to putting on what’s due to be the biggest and best travel exhibition yet – we’ve compiled a list of 20 moments worth remembering from previous shows.

1. Let’s start at the beginning with our first show way back in 1997. It was a little cramped compared to the amazing space we have now at the NEC but we enjoyed two fantastic days at the National Motorcycle Museum in Solihull near Birmingham. It was also memorable for a highly inconvenient fire alarm which forced everyone to vacate the venue. Luckily it was a false alarm, although because of the lovely weather some visitors decided to stay in the sun – the trials and tribulations of an exhibition organiser!

2. In 1998 we made the move down south to the Wembley Exhibition Centre in London. We would enjoy seven great years there, although who remembers the awful trek across London to get to the Group Leisure Awards in the West End?

3. The introduction of free bacon butties in 2006  year was a huge hit (especially the morning after the Group Leisure Awards). It’s the smell that captivates people apparently; and who are we to argue? It’s just another way we try and make the show a really enjoyable experience.

4. All the moving around from the north to the south resulted in a very sensible decision to move the exhibition to The NEC, Birmingham. It was something that many visitors and exhibitors had been urging us to do for many years. It’s now been our home since 2006.

5. We went from a two-day to a one-day show in 2014 and thankfully it was a huge success with a real buzz created by everyone being there on one very busy, packed day.

6. Exhibitor, Park Inn drove a Mini onto their stand in 2009. Filled with balloons, visitors had to guess how many were jam packed in there to win a fantastic competition.

7. Bletchley Park brought the famous code breaking Enigma machine to the show in 2013, and visitors were encouraged to try and work it out for themselves.

9. Top travel journalist and TV commentator Simon Calder headlined as our Seminar Theatre returned in 2014. It was so popular that the feature is now central to the event and another great reason why visitors attend.

10. It may be known across the globe as the world-famous O2 Arena now, but go back to 1999 and all the talk was about something called the Millennium Dome. Many, particularly the media, claimed it would be a ‘white elephant’ but the interest was phenomenal with standing room only at its seminar session and a packed stand where visitors were eager to book and obtain information.

11. 2003 saw team members from the Holland tourism stand showing visitors how to make wooden clogs. Seriously, they were making wooden clogs on the stand, in front of you.

12. It was one of, if not the best, years for mascots at the GLTS in 2008. A soldier from Shakespeare Country and a red devil from Manchester United Football Club were some of the party.

13. In 2005 we had a brilliant cast performance from the hit musical Chicago which graced our stage. It was one of the biggest West End draws at the time and who can forget all that jazz?

14. In 2007, we agreed very last minute to accommodate a company that provided a tank of live fish that gave a foot massage by nibbling at visitors’ feet when immersed. The NEC then hit the panic button regarding health and safety. We held our breath thinking the stand would have to be closed and the fish taken away, but fortunately the paperwork was available and produced on the morning of opening day. Anyone remember it?

15. Exhibitor Madame Tussauds had a brilliant wax figure of Barbara Windsor on their stand in 2000. It’s a photograph that has been used time and time again in marketing over the years. You’ve got to love Babs…

16. Davenport’s Magical Kingdom came along and put on some exciting magic displays in 2013. Who doesn’t love a bit of magic?

17. Hats off to popular tour operator, InterChoice Holidays – they know how to create a stir and do something different. In 2009 they brought an ice cream van with them – it unsurprisingly went down a treat with visitors and exhibitors alike.

18. We have had some amazing celebrity experts and speakers but Simon Reeve was certainly one of the biggest draws when he took to the stage for an engaging Q&A in 2015. Having helped host the Group Leisure Awards the night before it was fair to say we were all a little tired, but it was standing room only as Simon answered questions from the audience and shared some of his fascinating travel experiences.

19. Perhaps one of the most popular promos on the Group Leisure magazine stand was in 2006 when our media partner included a crazy golf putting competition and a Scalextric track.

20. 2016 is the first year we’ll have seven coaches in the hall on display, yes you read it correctly… seven top of the range coaches on display for people to explore. The coach display area is already looking to be a big highlight and will really add a fantastic dimension to the look of the hall.