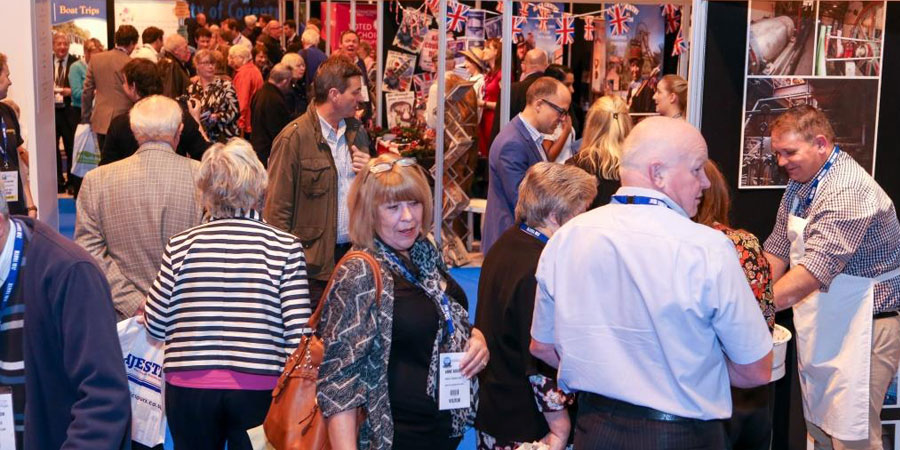 A live antiques valuation, appearances from King Henry VIII and Miss England, the chance to win £2,000 in cash and even a giant game of Monopoly… we look back at this year’s Group Leisure & Travel Show and list just a few of the many highlights that make this event not just useful, but fun too.

Eric Knowles of Antiques Roadshow fame held an antiques valuation session on the Group Leisure stand. Lucky competition winners brought in items that included an old police truncheon and some vintage rings for Eric to value.

Michael Taylor, who organises for Wokingham Stroke Club, was very excited: “I brought along a programme from the fifties, signed by actor James Stewart,” he said. “Eric valued it at around £150 – it originally cost us £1.90. Forget about shares!”

The team on the Middleport Pottery stand held live pottery demonstrations all day – and plenty of visitors had the chance to have a go. The team were also giving away little pottery mementos for visitors to take away with them.

Miss England and Miss North West attended the GLTS with the tourism team from Southport. Both ladies were on hand to chat to visitors and boost interest for the Southport region – and pose with visitors and even exhibitors in photos. They were very popular!

4) A giant game of Monopoly

A giant game of monopoly took place around the hall, hosted by Johnsons Coaches which exhibited in the Coach Display Area. Johnsons Coaches has very recently been chosen as a square on the new Stratford-upon-Avon Monopoly game, and so to celebrate the coach company teamed up with other GLTS exhibitors to create a game for all visitors to get involved in.

Group travel organisers and exhibitors alike picked up a playing card and headed to stands such as The Eden Project and Blenheim Palace to find out the answers needed to win a prize.

Another competition that proved popular was of the sporting-type. Skittles holiday company Serious About Events held a day long skittles competition, during which GTOs were invited to try their hand at downing wooden skittles at the end of a bowling alley.

Prizes were given to the man and woman with the highest scores. Niramla Lamichare of Summit Hotels scored 14, and Trevor Longthorne from Lovedon Travel scored 16. Both winners walked away with a weekend for two at a Serious About Events venue of their choice.

The 2016 programme in the Seminar Theatre was a big hit, adding to the reasons why people feel a visit to the show is more than worth it. And as ever it was open to all.

One of the many highlights was scam expert Alexis Conran managing to con his audience without anyone realising until the very end of his talk.

The star of The Real Hustle on the BBC asked the audience to hold their hands out in front of them, before contorting them into a position that was then seemingly impossible to twist back – except Alexis seemed to prove that he alone could do it.

It was only after he’d filled everyone in on the best ways to avoid scams whilst travelling that Alexis admitted he’d cheated the ‘hand task’ by distracting the audience’s attention – by drawing it instead to a lady in the audience while flipping his hands back the normal way.

7) A huge coach display and a safe to crack

This year’s Coach Display Area was the biggest at the GLTS to date; seven coach companies displayed their premium and executive coaches in order for visitors to explore the features on board.

A certain amount of hype was built up prior to the GLTS when coach tour operator InterChoice announced it was giving visitors the chance to win £2,000 in cash at the show. Representatives were on hand with a glass safe filled with the money that could only be cracked by guessing the right code.

Despite everyone’s best Alan Turing efforts, no visitors managed to take home the cash. However, the person that got closest to the safe code has won a five-night getaway to the Preston Sands hotel in Paignton.

The team from Sudeley Castle were accompanied by re-enactors of King Henry VIII and Anne Boleyn, who interacted with visitors. Dressing up was on trend this year, with other exhibitors like the Black Country Living Museum also getting into character via attention-grabbing costumes.

Looking ahead to GLTS 2017 for exhibitors

The Group Leisure & Travel Show 2017 will take place on 12th October next year at the NEC Birmingham. Companies interested in exhibiting are encouraged to contact the organising team now to discuss the best available stand positions.

Exhibition sales manager Sharon Yandell reflected: “This was the 20th anniversary show for the GLTS and I think the experience we’ve built up over the past two decades really shined through on the day.

“Exhibitors have already signed up to be there next year in order to secure their preferred options. In 2017 we’ll be in an even bigger hall; if anyone is interested in exhibiting, now’s the time to get the position they want.”

You can call 01908-613323 or e-mail sharon.y@yandellmedia.com for further information about exhibiting or download the brochure here.